Should I buy Tot Pocket, which is currently on sale for iOS until the end of August? I’m currently using Drafts and experimenting with Notes SE.  Can someone provide me with feedback and use cases for the app?

@ningkantida I had (have) been using Drafts since its initial release. I bought Tot initially because it was by The Iconfactory, I liked its simplicity, and like applications that are simple yet powerful. However, back then Tot did not work for me and I uninstalled it both on iOS and MacOS.

I carried on using Drafts. I mainly use it for drafting emails, texts, write and publish blog posts, starting longer blogs before sending the text elsewhere, creating my notes (which I keep in plain text and send elsewhere), my digital journal which I send elsewhere, and just jotting down random thoughts that I feel I might use somewhere later.

So after a couple of years using Drafts I started to wonder how much of what I use it for could already be done using the iOS and MacOS share sheet? And then of that which could not be done using the share sheet, what actions could I create using Siri Shortcuts (by then Tot had Shortcuts support)? The short answer is that everything that I could do on Drafts, I could also do via either Shortcuts or the built in share sheets, and (for me) the added benefit was that I felt some satisfaction in having built those workflows myself.

So now I use Tot on both iOS and MacOS most of the time, and occaisionally I go back to Drafts (I have some months to run on my current subscription). The thing that drags me back to Drafts is (IMO) a better Markdown typing interface (but in Tot’s defence, it openly states that it does not intend to be a full blown Markdown editor). Also I’m not sure how to handle those random scraps that pop into my mind and I want to save? I have an idea, I just have to write a Shortcut or two to handle them and see if I am happy with the result.

I don’t feel the need to keep everything as Drafts allows us to do…although I did kind of get use to it all being there, even if I never went back to it. The seven dots of Tot I am finding to be a nice limitation.

I hope that this helps. Please ask away if anything isn’t clear.

ps. This was written in Tot on MacOS.

Drafts for me is where my thoughts start … sometimes even for mb replies - though not this one :-)

@ningkantida I use both Tot and Drafts, but for different things. Drafts is where most of my writing starts and later gets organized via Workspaces. I use drafts for just about everything. I use Tot mainly as a quick way to access frequently used drafts by linking them in Tot.

For example, in Tot, I have a link called MacBook Air 2022 Change Log that opens a draft that has a running log of all the changes I've made to my laptop. Anytime I need to add or review that specific draft, it's as easy as opening Tot and clicking the link.

I also use Tot to hold snippets of text or code that I may use at any moment. Kinda like a "text shelf". I haven't done much long form writing in Tot, but I do that in Drafts.

@ningkantida Yes, I would buy it. I paid full price after using just the Mac version a bit. I'm glad I did. It's a clever tool and flexible enough that you'll options for how you will use it. I'm using the checkbox feature for building lightweight project outlines.

@ningkantida I@jean @kimonostereo @JohnPhilpin @crossingthethreshold I love and hate these posts. Love, as I now know about more apps I had not heard about. Hate, because I am going to have to get my wallet out and start spending lol. Thanks for sharing all. 📝

@Munish I agree. I just downloaded it for Mac. I'm a longtime Drafts user, but mainly use it for story snippets or jotting down quick notes. Tot looks designed to do just this and would save me $20 a year.

@KyleEssary haha this is bad. How many text editors do I need? I will resist !

I am getting my head round obsidian .. which is good for storing notes - and on a phone can just use a simple template

@ningkantida Use Drafts for everything, except a small number of dots in Tot. I keep often used snippets there, since they’re easier, and quicker, to find in Tot. As others I purchased it almost immediately after it came out because The Iconfactory was doing it.

@ningkantida Well, I’d recommend it. I use it for pretty well everything — notes, drafts of posts, anything text-based. It doesn’t support a full set of Markdown syntax — though I can’t remember off the top of my head which markup is not supported. I tend to use very minimal Markdown anyway. It suits me, probably won’t suit everybody.

@ningkantida I dont think I would blog as much without Drafts. Write, press two buttons and thought is published. Can have any typeface, amazing themes, is constantly updated, remains lightweight - but I dont use it for anything else. it doesn't fit my flow. I like having different text editors for different tasks (1writer, Drafts, iA Writer, Obsidian, Notes, Word, Pages all get used for different things). Get both :).

@kaa I only use one app for text.

@crossingthethreshold Thank you for your detailed response. Your comment prompted me to rethink my Drafts use cases, and I've decided to lighten the load by using Tot!

@JohnPhilpin I, too, use Drafts as a thinking inbox, even for most of my m.b replies! On the other hand, finding the right draft to work on becomes tiresome after a while.

@kimonostereo That's brilliant! This makes me think I could have one dot for a cheatsheet, a workflow log, and possibly a weekly checklist.

@jean Now I see that Tot would be a great place to create a project dashboard with deeplinks and checkboxes. Simple but effective is exactly what I'm looking for!

@Munish Did you decide to buy the app? I'd love to have a friend who spends too much money on tools and apps like me. lol

@maique My use cases are likely to be similar to yours. I saw the app when it first came out but couldn't bring myself to buy it at such a high price; now that it's on sale, I feel like I can bite the bullet.

@artkavanagh I tinkered with the Mac app version, and it bothered me that it doesn't support headings and quote blocks, which I frequently use. But because I think the pros outweigh the cons, I believe I can make it work.

@kaa Same! I tried using Ulysses for blogging, but it was too time-consuming. Drafts are much easier to manage. As a bilingual person, the ability to change themes and fonts is also extremely important to me, and Drafts brings me so much joy. That's a lot of apps! Now I'm interested in your use cases for each of the apps you mentioned. haha

@crossingthethreshold @JohnPhilpin @kimonostereo @jean @Munish @KyleEssary @maique @artkavanagh @kaa @maique @artkavanagh @kaa Thank you for participating in this discussion. After taking some consideration, I decided to purchase Tot Pocket!! I believe Drafts is where ideas begin, but Tot is where active projects will be moved from now on. I'll probably write a post about it after I've given it some more thought.

@ningkantida I did not. However, I am feeling the peer pressure lol

@Munish No pressure, just a friendly reminder that the sale is almost over lol

@maique Thanks. I’m still tinkering with the workflow but enjoying the app so far.

@ningkantida @crossingthethreshold @JohnPhilpin @kimonostereo @jean @Munish @KyleEssary @maique @artkavanagh @kaa @maique @artkavanagh Jumping in, I have been following this discussion and have a question or a comment, I don't know. For years I was using Drafts for all my blogging-related things, from composing to publishing. One of my biggest issues was the fact that Drafts doesn't handle images, so I had to rely on actions and shortcuts. That was Issue number one. Issue number two, English is not my first language, so I always worry about my spelling and grammar so on top of writing everything in Drafts I would have to copy and paste to Grammarly, make corrections, come back to drafts and then format links and add images, etc. Then Ulysses came around and made it much easier to add images in between texts and on top of that, they added revision mode. It is not as robust as Grammarly but is good enough to make me comfortable enough to publish without too much fear. Also, I don't like seeing all the markdown formatting and still, There's something about drafts that I really would like to use over Ulysses but I get more benefits from the latter. This is a constant struggle for me lol

@ningkantida haha no worries. Is there the ability to indent smart bullets ?

@ningkantida You’re right, it doesn’t support them now. I’m sure it used to. I wonder if this is a bug introduced in a recent update? If not, I’m amazed I never noticed it before.

@ningkantida @artkavanagh I don't believe that Tot (both versions) has ever supported headings and quote blocks. It is one thing that bothers me about Tot (even if the devlopers makes it clear that it is not a full blown Markdown editor). I can still enter the syntax and my mind will "see" what I am doing, by aesthitically it is still something that I would like. This is one reason why I keep Drafts in the background.

@ningkantida Great. I'm pleased that what I said was of help. 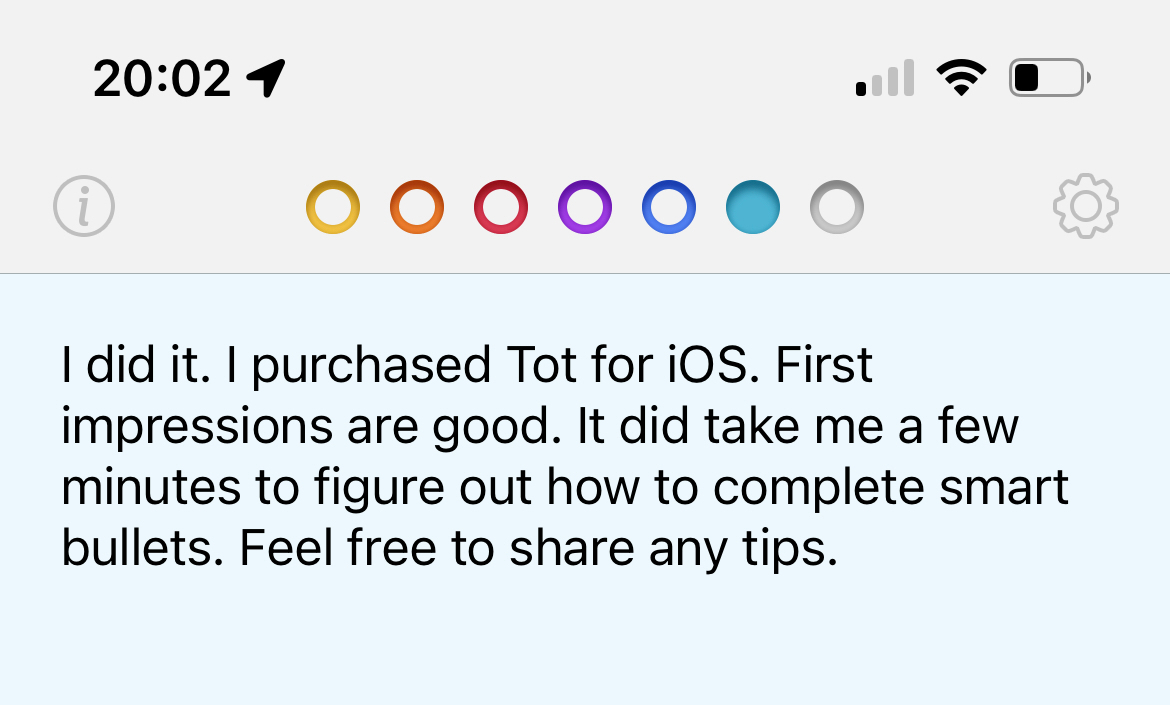 @Gaby Yup! On the Mac. Grammarly is now a system-level app. It even shows up in the MB post/reply window.

@kimonostereo I did not know that it was possible to create links to individual drafts outside of Drafts. That now gets my mind working as to what I might do with this tool. Thank you 🙏

@crossingthethreshold Yeah, it's quite handy to also link to Drafts from other places. I often have reminders in Things that links to a Draft.

@ningkantida I also find it helpful as a place to list my automation keyword shortcuts and snippets, since I can't always remember what they are in Keyboard Maestro or Alfred.

@Gaby As a bilingual, I completely understand your grammar concerns, which is why I always use Grammarly (in Drafts), Quillbot, and, in some cases, Language Tools in Ulysses. I'd like to post using Ulysses, but I'm not sure how they handle URLs; whatever I typed in was somehow deleted. Could you please shed some light on how it really works?

@crossingthethreshold @artkavanagh I'm still baffled as to why they only included syntax for bold and italics. I wouldn't mind if there was no support at all, but half-baked support like this bothers me. That's also why I'll export the drafts to Drafts in the end.

@Munish Hello and welcome to the Tot gang! lol And yes, that also made me scratch my head for a few minutes lol. I'm still figuring out my workflow, but I like using it as a dashboard with deeplinks to other apps.

@crossingthethreshold @kimonostereo I did the exact same thing! I also added Things and Drafts links to some calendar events for reference. Putting keyword shortcuts is also a smart idea; I may have to do something similar in the future.

@ningkantida same here, using it as a dashboard