It’s been a while since we have done a Micro Monday roll call. (We’ve been doing a series of roll calls to help enthusiasts find each other.) This week’s topic is Wordle addicts. Leave a comment, and maybe share a strategy or stats, so others can find and follow you.

@jean I'll start. Out of 29 days, I have figured it out in 2 guesses 4 times. Every morning, I start with the first 5-letter word that pops into my head.

@jean 👋 I’m on a 28 day streak and mostly get it on the fourth guess. I don’t have a particular strategy and often need to think it out on paper

@jean No real strategy other than I start with the same word every time.. SAINT

I have had a few two try wins, then again today was 5 and yesterday was 6...lol

@jean I enjoy starting with a different word each day. I try to form my first guesses from the following most common letters: ETAONRISHD . I've failed utterly once but often get the word on the third or fourth guess. 😀

@jean Addict is a strong word, but I am playing every day. The only tip I can give is definitely wait until you've had some coffee. Other than that, I've just been enjoying the challenge of getting the word in the least number of guesses possible.

@jean I play every day, usually start with DREAM, then LOUSY if I get no letters first go. I've yet to guess in less than three attempts, usually get it in 4-5.

@jean Love it and play it every day. Share the squares with at least 3 groups of people. Row 4 is my sweet spot. Yet to get it on row 2. I've failed twice. I too start with the same couple of words every day.

@jean play most mornings; usually starting with ADIEU and/or FOLKY (covering all the vowels). Even after finding the word list in the source code, some tries I forget what today’s word is supposed to be… 🙃

@jean yes, and I am terrible at it. This is the one little place in my life I don't want to strategize, optimize, or tweak in any way beyond just staring at the screen and guessing. Which means I usually guess it in .... 6.

@jean Currently on a 21 day streak. I have four different words that I usually start as the first guess (HOUSE, TRAIN, TRUNK, PARSE). Got one right on the second guess, but mostly I get it on the third. I failed to get the word once (almost twice but we were doing it again as a family later and I proposed the correct guess, so I think that counts 😉).

@jean Yes, on a perfect streak of 35 games. A few were very close! I change up the starting word each time, but try to make it contain a few of the most common letters.

That warm feeling when you suddenly hit upon a combination of green letters that dramatically narrows the possibilities is a wonderful way to wake up in the morning!

@jean Wordle is what I most looked forward to during my late fall and early winter (2021) days. I would solve them in the morning with a cup or two of tea. I still play Wordle though it's not the first thing which crosses my mind these days. I always start with a different word and I never post my results

@jean I haven't lost a game yet, though I think if you play carefully it's hard to lose. I always start with the same two words. For a while I used the vowel-heavy "raise" and "youth". Recently I've been using more consonant-heavy "crest" and "plank". I haven't noticed a difference in success. I play a couple of puzzle games when I wake up (even before coffee!!), and Wordle is one.

@jean I play - stopped posting results unless I beat a previous record - which means the next time I post I will have nailed it in one … so highly unlikely :-)

I’m also not as vigorous as daily as I used to be.

@jean I like starting with two random words, each with unique letters. From there, I try to figure out the answer.

@jean I also go with a random word, hard mode even before I knew it was an option, and have missed some, but have actually gotten a first guess correct.

@jean I've been playing every day for the last few weeks, but I generally don't share my results. Most often I guess it in 4, and if not usually 3 or 5 (only once did it take me 6). I've tried both the "get the vowels first" strategy and the "consonant-heavy words first" strategy but seem to get much the same results from both. I've also played the Spanish and Catalan versions of Wordle a bit less regularly, which has been a fun way to try to bring more of my passive vocab into active vocab 😆

@jayeless I didn't realize there was a Spanish version. That's great!

@jean I normally start with the same word, just to get the ball rolling. I did try to use the same three words to start, but agree with my wife that that took the fun out of it.

@Cheri There is! You can check it out here if you're curious :)

@jean Yay, Wordle! I love Wordle and other word games like Scrabble and Letter Tycoon. I don't know what my streak is because I keep switching devices to play. I like using BEARS as a starter word. I didn't enjoy the snarky comments about sharing scores, so now I just "share" them with myself in Day One.

@thedimpause Interesting. I normally start with "Arise" because of all the vowels, plus "s". Was challenged this morning by an US spalling.

@adders Me too - pondered for a long time this morning! Identifying vowels first definitely helps me.

@adders Yeah, the todays spelling threw me too. It’s not the first time, remember it has happened before.

@jean only played 11 times. It has become an after dinner activity for us as a family. 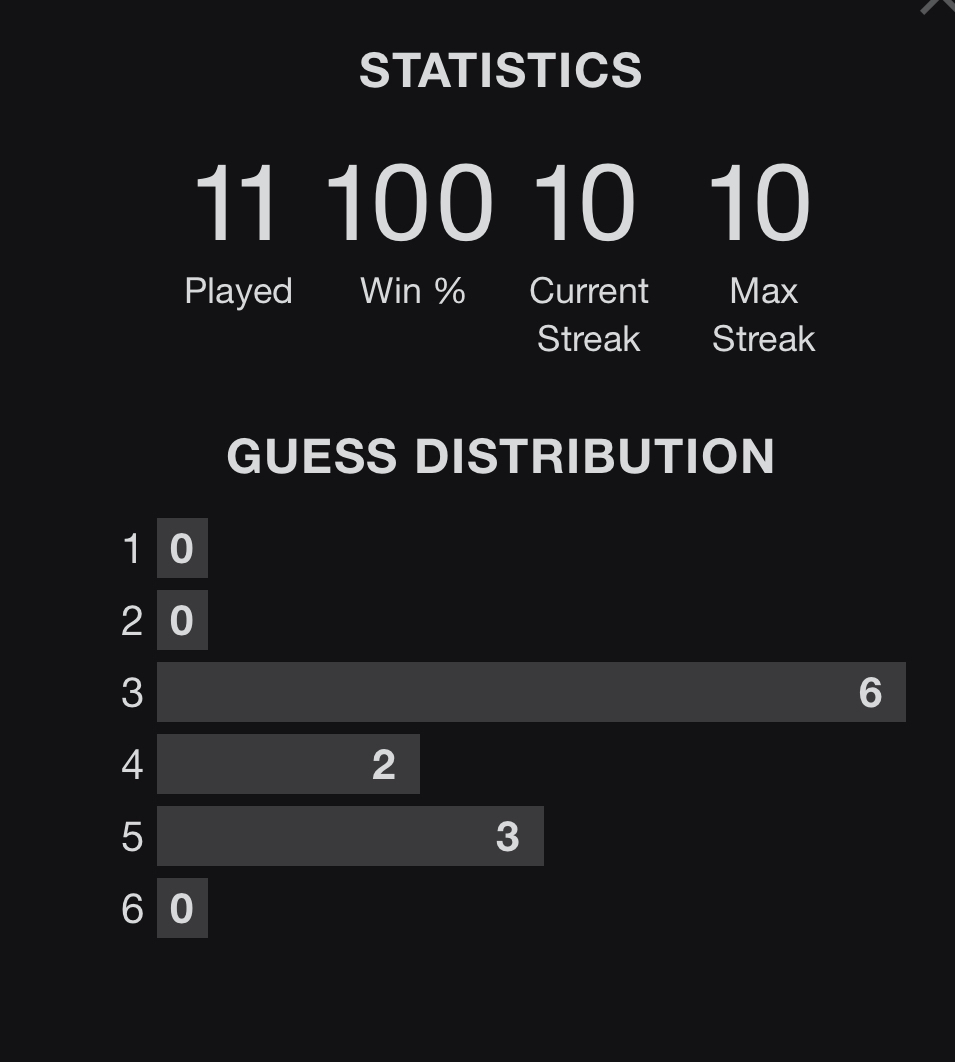 @jean I admit that I find myself doing the Wordle most days. For me, it's the post-lunch "get my brain in gear" fun.

@jean My sister started sharing her Wordle results in our family text chat and then my father, and then my mother, and who am I to refuse the call? Every day, this is how we start the day. It’s a cute little ritual, but I imagine the kids likely have mixed feelings about it. 😂

@alexis That’s fun! I wish my family would do this. I don’t feel like sharing them on my blog because someday that will be clutter. (With one exception 😇)

@alexis We have a separate Wordle group on Messages (my 11-yr-old son is the most frequent poster) coz MiL got tired of seeing Wordle and other word game (3-4 more) results flooding the original family text chat group.